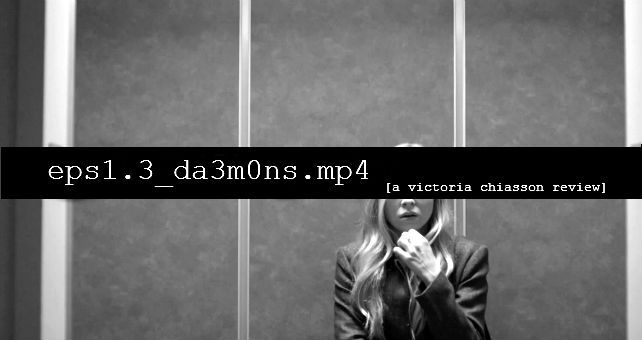 This was a pretty strange episode, but only because we had to witness Elliot going through withdrawal. Because of his withdrawal, we saw some pretty wild hallucinations like his fish talking.

The withdrawal was part of Elliot’s journey where he figured fsociety could destroy back-up files at Steel Mountain by accessing the climate control system. Slight snag in the plan, they have to physically be there. Ensue road trip music.

Meanwhile, Angela experiments with Ecstasy (and Shayla). She then decides to follow through with infecting AllSafe’s system with the disc given to her by Cisco (who we find out is Darlene’s ex). She uses Ollie’s work ID and computer so that the trace will come back to him and not her (obviously.)

Since Mr. Robot is a clever show, we are going to look at what exactly is a “daemon.” Strictly relating to computing, daemons refer to any background process. In Greek mythology it is “a supernatural being working in the background, with no particular bias towards good or evil.” Which begs to ask… Mr. Robot, are you Elliot’s daemon?

So far the show is leading up to this twist and if you are a good viewer who pays attention to the other members of fsociety, they do not interact with Christian Slater’s character. Mr. Robot seems to only communicate with Elliot.

Mr. Robot out of frame holding a book.

A wild Mr. Robot appears beside Trenton with no book.

“Daemons. They don’t stop working. They are always active. They seduce. They manipulate. They own us. And even though you’re with me, even though I created you, it makes no difference. We all must deal with them alone. The best we can hope for… The only silver lining in all of this… is that when we break through, we find a few familiar faces waiting on the other side.”